This is a very technical post. It is intended for people who are seriously interested in finding ARC documents on-line at the Mary Ferrell Foundation website. Everyone else can skip this one.

RIF documents in the ARC

The JFK Assassination Record Collection (ARC) is the great repository of all Federal agency records related to the assassination of President John F. Kennedy, and includes many state and private records as well.

There is a wide range of records and documents in the ARC, but one of the most important and extensive record sets is the records which were transferred to the National Archives and Record Administration (NARA) after the Assassination Record Collection Act (ARCA) was signed into law on October 26, 1992.

The ARCA required that each of these records should have an identification aid attached to it (now usually added as a cover sheet on top of each document). The current version of this aid is called a Reader Identification Form (RIF). As shorthand, I’ll call documents that have an associated RIF “RIF documents.”

One of the main points of the ARCA requirement for an identification aid was to enable the compilation of an electronic database of assassination record data. NARA carried through on this intention, and according to them, the latest version of their on-line public database has data from 319,000+ RIFs.1

The Mary Ferrell Foundation website (MF) has the largest collection of ARC documents available on-line. Of the 319,000+ RIF docs listed in NARA’s database, MF claims it has 101,113 on line.2 This surpasses even NARA’s website, which currently has about 35,000 RIF docs on line.

As this post will show, however, MF’s count is, if anything, an understatement; it has thousands more than that. This was a surprising discovery for me, and I am not sure if MF itself knows just how much it has under-counted its collection. The rest of this post explains where these ‘extra’ documents come from.

Each RIF provides detailed information for the document it is attached to. Current RIFs consist of 17 data fields plus a unique 13 digit identifying number (RIF number). RIF numbers are very convenient in referring to specific documents and are now almost universally used in research and discussion of the ARC.

When MF says it has 101,000+ documents, it is referring to documents for which these RIF forms have been created. In addition to these RIF documents, however, MF also has a large number of ARC documents which use a different identification form and numbers. I believe these are earlier versions of the RIF form, so I will distinguish the two forms as ‘new RIFs’ and ‘old RIFs’, and the documents they are attached to as old RIF docs and new RIF docs. Below are examples of new and old RIFs from MF: 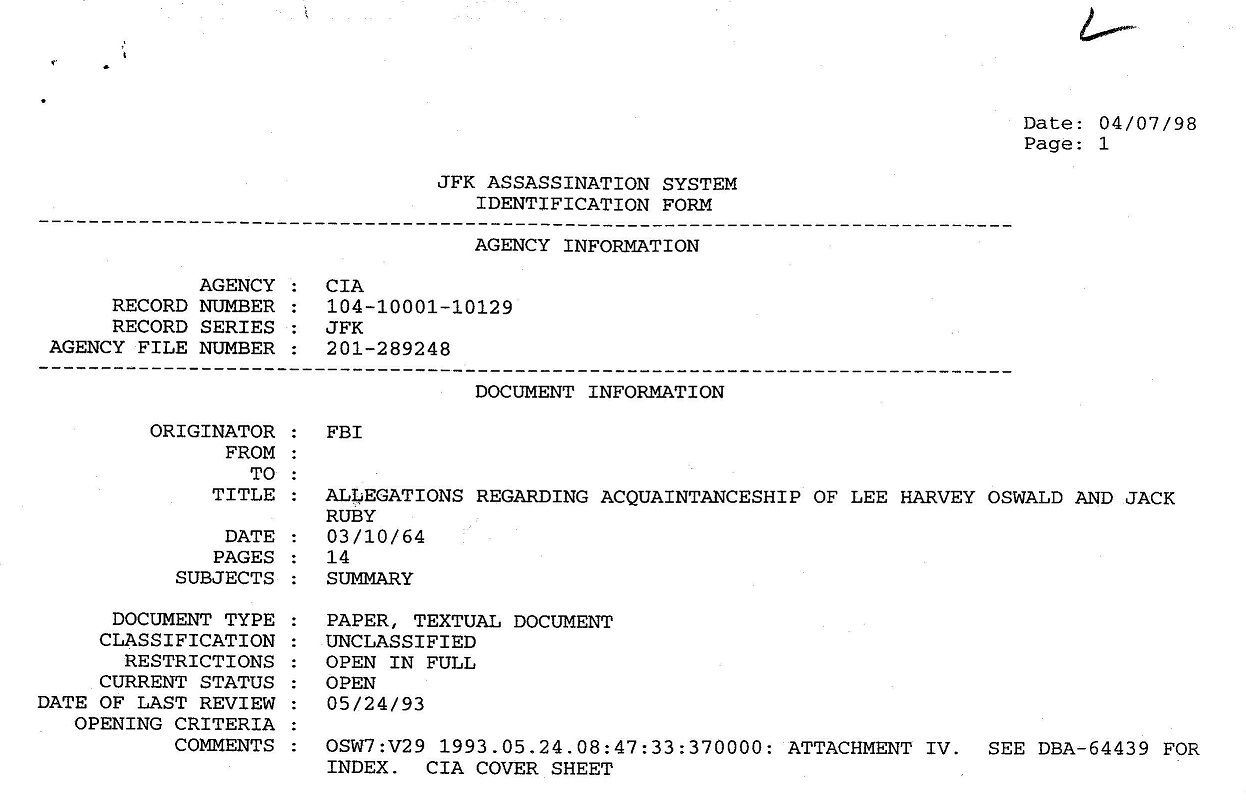 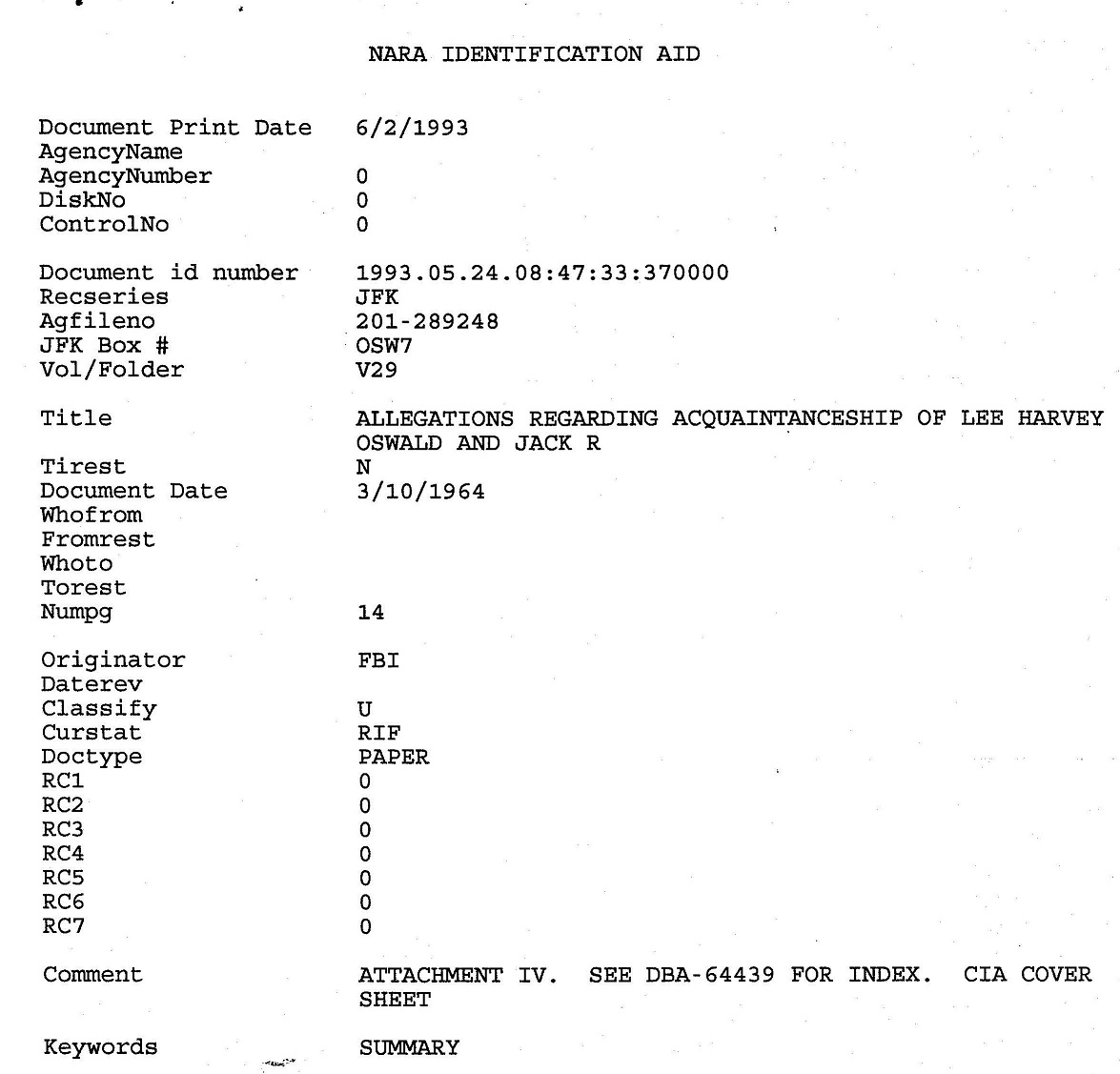 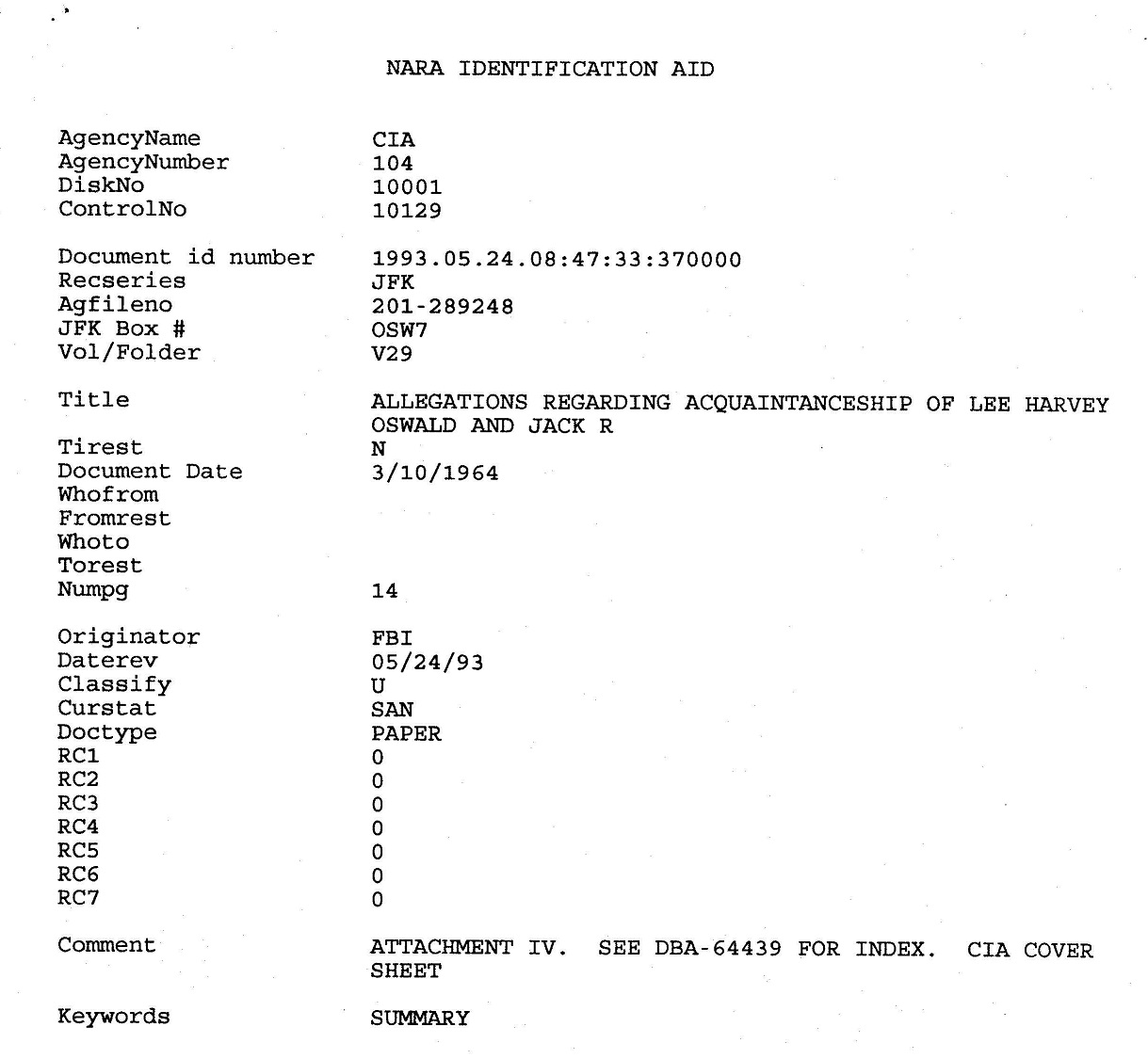 A ‘new RIF’ such as the one in MF docid 18920 is titled “JFK Assassination System Information Form”, and divided into two sections: “Agency Information” and “Document Information” with a total of 18 data fields. The record number for our example doc is the 13 digit number 104-10001-10129, formatted as described above.

The ‘old RIF’ examples are identical in form, but include slightly different information. This form is labeled ‘NARA Identification Aid’ and instead of the 18 fields in a new RIF, it has 32 fields, some differing in name and/or content from current RIF fields.

The Old RIF ‘agency’ fields include the agency-no, disk no, and control no. mentioned above. Old RIF example 1 has zeros for the agency data fields, but old RIF example 2 has filled these in, and the agency number, disk number and control number are equal to the 13 digit record number in the new RIF, again telling us that all three of these documents are versions of the same ARC record.

The old RIF ‘document id number’ field gives what I would call an accession number: date, time,and a six digit string (Y.M.D.H:M:S:dddddd); presumably this was the date/time the document was registered in the system.

The two old RIF fields “JFK box number” and “vol/folder” are no longer used in new RIFs, but the data from these fields in our examples has been incorporated into the new RIF comment field, together with the old RIF doc ID number; in the example here, we get “OSW7:V29 1993.05.25.08:47:33:370000”. The rest of the comment field is the same in both the old and new RIFs.

The doc title, agency file number, doc date, rec series, and number of pages are also the same, so that the basic data matches in both the old and new RIFs. The old RIF ‘keyword’ field seems to be the same as the new RIF ‘subjects’ field. The old RIF “curstat” field is the same as the new RIF “current status” field. The contents of “curstat” differ in the two old RIFS. In old RIF 1, curstat is “RIF” (probably = ‘released in full’); in old RIF 2, curstat is SAN ( probably = ‘sanitized’).

Why are there three versions of 104-10001-10129 at MF? It seems that these represent different stages in the document’s release. The print date for old RIF 1 is June 2, 1993. Although it is marked ‘RIF’ (released in full), page 6 is blank, except for a stamp that says “Coordination pending.” This means CIA was checking with the FBI whether it was OK to release the information on this page.

Old RIF 2 (marked ‘sanitized’) does not have a print date, but it has a new stamp on page 3, which says “Reviewed by FBI/JFK Task Force on 12/16/94: Release in Part.” Looking at page 6, the text is restored, but blanks and brackets replace names to protect identities.

The new RIF version of the document is marked “Open,” and looking at page 3, the stamp now reads “Reviewed by FBI/JFK Task Force on 11/9/96: Release in full.” Looking at page 6, the names have all been restored.

The “JFK box #” and “vol/folder” fields in the old RIF form are interesting. These suggest that the old RIF was specifically intended for CIA documents, and indeed, as far as I can tell, the old RIF is never used for documents from any other agency. (The example given above is an FBI document collected in the CIA’s 201 file for Oswald.)

The Oswald personality file doesn’t have such a high percentage of old RIF docs in any one volume, but they appear in signficant numbers from vol 27 and up (MF labels these ‘RIF based volumes’), and probably total 2-3000.

The HSCA Microfilm collection has an even lower percentage of old RIF documents, but again they appear in almost every roll, from 1 to 71 (rolls 32 to 42 are blank in MF), so maybe another 1000 there.

Since the old RIF documents use accession date/time in their record numbers, we can also estimate when the old RIFs were produced. The record id number for the vast majority of old RIFs in the Segregated Collection and Oswald 201 Collection are from May to August, 1993. This makes sense, because the ARC was opened to the public at the end of August, 1993 (a date fixed in the ARCA). These RIFs probably represent the government attempt to have as many documents available as possible when the collection opened.

Oddly, the old RIFs in the HSCA Microfilm Collection records were mostly done in 1994. I have found a handful of old RIFs done in January 1995, and after that there are no more old RIFs. The dates in the new RIF comment fields accession strings, however, go up into the 2000s.

The value of old RIFs

What does this all mean to users of the MF documents? It means if you have patience, you can identify which old RIF documents equal which new RIF documents. This is more meaningful than you think.

In particular, since there are so many old RIF documents on MF, I thought it was reasonable to expect that some of these might be ARC documents which were not available on MF in ‘new RIF’ versions.

The result: I found 172 of the 177 documents with prefix 104-10001. There were actually 219 documents with matching accession strings, indicating that there are numerous duplicates, but duplicate or not, that is 140 documents more than MF’s own count, meaning 140 documents are available at MF that I had not known were there.

That is worth repeating again. MF doc count: 32. Actual doc count: 172. For those interested, there is an excel file here which gives links to the old rif docs, cross referenced with the modern RIF number for these docs. If this rate holds true for the old RIF documents in general, there should be thousands more CIA documents on MF than their count indicates. This is good news for those who don’t live next door to NARA.