This website is where I post my notes on the John F. Kennedy Assassination Records Collection (JFK ARC). I am also slowly putting together an introduction to the Collection for general readers. The short description is on this page. Links to more detailed descriptions of the Collection’s history and contents are below. For the moment, most of the site content is in the notes posted in the blog section.

For those wondering, I am not employed by or affiliated with NARA or the JFKARC.

About the JFK ARC

The collection is held by the National Archives and Record Administration (NARA) and includes the files of the government investigations of the assassination and most of the physical evidence in the case. NARA currently estimates that the Collection includes over 300,000 records, with approximately 5 million pages. 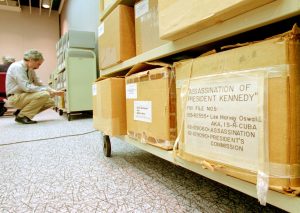 Most of the records in the ARC were released in full to the public between 1993 and 1998. Some of the records, however, continue to have text redacted. Matters redacted include sensitive information, such as the names of government informants and methods of gathering intelligence, or personal information such as tax records. A more detailed discussion is coming!

Records with redactions are now being reviewed for further release, possibly later this year. I will post when I have further news on this. The most recent previous release of document content was from July 2017 to April 2018, and many of the notes in the blog section discuss this newly available information. A more detailed discussion is coming here too!

I became interested in the ARC in October 2017, after the first two big record releases at NARA. News coverage of the releases was confused and contradictory, so I began to look at the Collection myself. My first posts on the ARC were at my regular blog, (rgr-cyt.org) where I usually wrote about things my students might find interesting. After 40-50 posts there, I decided to set up another site, focused on the ARC.

This site began in December 2019. The earliest posts are my old notes, edited for consistency and accuracy. At the top of these is the date they were first put up and a link to the original posting. Everything since January 2020 is new content.

This website is still under construction, so occasionally things will change or move around without much notice. Comments, criticism, and suggestions are welcome!