One problem in counting collection items is that the line between “records” and “evidence” is somewhat blurry. The first collection of items relating to the JFK assassination was assembled by the Warren Commission. This collection included all the physical evidence of the case, such as the gun that Lee Harvey Oswald used to shoot the president, bullet fragments recovered from the presidential limousine, the clothes President Kennedy and Mrs. Kennedy were wearing that day, and so on.

Strictly speaking, these are artifacts, not records. Many of these artifacts are referred to as “Commission Exhibits” because of their use in the Warren Commission’s report. Some items were acquired later, however, such as the dress Mrs. Kennedy was wearing when the President was shot. This was donated to the National Archives by Mrs. Kennedy’s daughter Caroline in 2003. Finding a complete listing of these assassination artifacts is a complicated task that I won’t go into here.

Another complicated problem is finding a complete list of all the audio-visual material relating to the assassination. This includes items such as the famous Zapruder film, an 8mm file which recorded the shooting of President Kennedy, tapes of the radio conversations between Air Force One and various military units and agencies as it flew back to Wasington D.C. carrying the new President and the coffin of the slain President, and photographs of pre-assassination and post-assassination events and figures.

The vast majority of the records are documents produced by, and obtained from, federal agencies. It is not easy, however, to say exactly how many records are in the collection, or which agency they came from.

The Commission not only produced a huge amount of documents on its own, it collected many documents from other government agencies involved in the assassination investigation. It also

The most convenient register of ARC records is the Assassination Collection Reference System (ACRS; as of October 2020 this is off-line for maintenance). This is NOT a complete list of the contents of the Collection, but it does 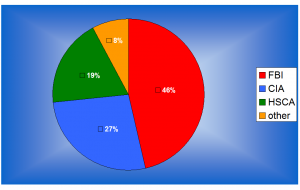